Let me tell you about all of my mommies!" said my five-year-old son one day as we sat in our kitchen. He began counting: "There's my first mother in Korea, then Mrs. Cho (his foster mother), and then you - you're my third mom!" So simple to his five-year-old mind - but of course adoption is anything but simple. By sharing my thoughts here I hope to better understand the experience that has shaped my life.

I'm Third Mom, known to everyone else as Margie, adoptive mom of two Korean teens. I live in Northern Virginia, with my husband Third Dad, our 17-year-old son and 15-year-old daughter. Third Dad and I have been married for almost 32 years. We met at Georgetown University, our alma mater, and have lived in the DC area ever since.

I studied foreign languages and applied linguistics at Georgetown, and taught for eight years in the Fairfax County Public School system, followed by several years teaching at a private ESL school for adults. I now work as a program manager in telecommunications, but my dream is to return to school for a degree in sociology.

Third Dad is a stay-at-home-dad, and has been since our son arrived in 1989. His passion is antiques, so I've grown used to a parade of furniture and things in and out of our garage. And I've also learned how to snag the good stuff for myself.

Our children, The Boy and The Girl, are now teens. The Boy is the intellectual in the family, a highly-motivated student who is totally devoted to drama and theater at his school. The Girl is the athlete, and is competing nationally in taekwondo, her passion.

In 1996, a group of close friends and I co-founded an organization called Korean Focus. KF's mission is to help create connections between the Korean adoption and Korean American community in our area. KF sponsors programs on Korean culture and adoption issues, and now has chapters in Maryland, Cincinnati, and Seattle, and a new one underway in Indiana. For a small organization it has done some great events, and I've loved every minute of my involvement. 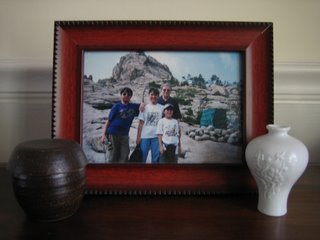 My husband and I came to adoption by way of infertility. We adopted through a large agency in Washington, DC. Our first child, our son, arrived in 1989, and our daughter joined our family in 1991. They are exactly two years apart, and were six and four months, respectively, when they arrived.

Our decision to adopt Korean children was influenced by nothing we can think of other than a desire to work with an agency that would work with a couple nearing forty. When we reached our decision, we learned that a neighbor was also in the process of adopting a Korean child. They shared their experience, we felt it was a good path for us, and so we proceeded.

We knew absolutely nothing about adoption. We took an adoption preparation class and attended seminars, but that's about it. At the time, our agency offered little preparation outside of the homestudy. Reading helped somewhat, but at the end of the day we were little prepared to support our children's emotional needs.

Reality hit me at the airport on the day our son arrived. His birth mother's presence was overwhelming. Who was she? And who was his father? His grandparents? Where were they? Why were they separated in the first place? And why did we need to stay separated?

In the intervening 17 years I've learned that the complexity of the adoption of Korean children offers many questions, many concerns, and few answers. The joy I now and always will feel at being my children's mom will never dampen, but I recognize now more than ever that my joy cam at a great price. And so, I do what I can now to increase their chances of finding their birth families in the future. And I keep the hope for those reunions in my heart.
Labels: Culture Infertility Kids

Laurie said…
I love your site, and your commentary. We recently moved from Arlington, VA to Colorado, and am currently a Georgetown Med student, as is my older sister! My little brother's alma mater is Gtown undergrad as well. Small world.
Thanks for sharing your adoption story; I really enjoyed reading about your family.
March 6, 2007 at 12:53 AM

I am really happy to say that you are one of the few a-parents out there in the blogosphere really devoted to the REAL serious issues facing transracial adoption. As a transracial Korean adoptee, I'm blown away by your complete honesty, deep socio-critical insight, and overall compassion. I'm so glad to know there are a-parents out there like you. Keep up the great work!

Margie said…
Gang Shik, all I can say is that I try. There's s much wrong about adoption the way we practice it in the US and in many other countries. And unfortunately, a-parents hold a lot of the power that can change it. We have to look at these hard issues to do that, though. So I try, and hope I can help.

I've followed your thoughts here for about a year, and I just wanted to finally take the time to say thank you. I'm a Korean adult adoptee currently living in Philadelphia, attending graduate school here. Your thoughts are powerful. Thanks for sharing.

Hope to meet you someday. Will you be at the KAAN conference this summer?