Frenzied Week in the Land of Morning Calm

I think I’m over the worst of the jet lag, and am finally going through photos from my trip, notes from the conference, and memories of a wonderful week. Considering I had just a week, I think I did a lot – and I definitely had fun. For grins, here’s a run-down of my schedule, start to finish.

June 28, 10 PM: Arrived at the Renaissance Seoul Hotel, dropped my luggage, ran back out to get a couple of bottles of water, and went to bed

June 29, 8 AM: Met a group in the lobby of the hotel for the start of a day trip to Icheon, the ceramics (and best rice) capital of Korea. Here’s our day:
June 30, 9 AM: With my friend Mike and his son, I headed over to the Hongik University area (a favorite) so Mike could claim some luggage he left there earlier in the week, his son could hit the internet to catch up with friends, and Mike and I could walk up to Eastern SWS. But first – breakfast at my favorite Seoul café – the Richemont Bakery around the corner from the Hotel Seokyo.

June 30, Noon: Lunch at a Chinese restaurant with my friend Jeena, who is back in Seoul after finishing her master’s degree at the University of Victoria. It was great seeing her, catching up on her family – and the combination of chapchae and fried rice was delicious!

June 30 afternoon and evening: KAAN Conference socializing, welcome dinner and films. More on the conference in another post.

July 2, morning: KAAN Conference and good-bye to friends who were leaving. 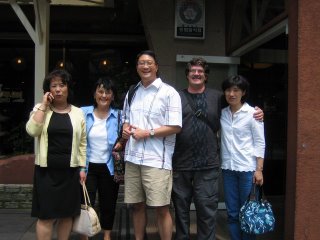 July 2, noon: Met a group of DC friends from KAC-DC (Mike, Sunny, Jin, and David) who are either living in Seoul now or were visiting. Sunny drove us and Jin’s friend Robin to a wonderful duck restaurant for lunch. We feasted on two kinds of duck: duck stuffed with rice and black beans and roasted in a pumpkin, and duck roasted in a clay pot.

July 2, afternoon: Sunny, Jin, Robin and I headed to Insadong to shop.

July 2, evening: Carole, Michelle and Leslee of Korea Homeland Tours returned with their tour group. Once the tour was safely onto their next agenda item (seeing the new show Jump), the four of us headed up toward Hongik University to find a place for dinner – we passed up the "Virgin Bikini Sexy Events Bar" for Italian. Then a leisurely stroll back to the hotel, with a little window shopping in the trendy boutiques and lots and lots of laughing. So much fun. 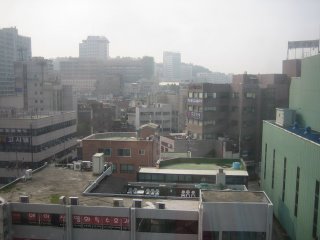 July 3, morning: After breakfast at the Seokyo, we walked up to Eastern SWS again for a meeting with the Director and visits with several of the social workers. For those who have read about the file nazi, this was when I was able to see our children’s files and confirm that the photo albums they made in 2001 were in them. I was happy to see that ESWS is now cataloging everything in the files in a computer system, also happy that they were willing to let me see the files. Sadly though, there have been no contacts from my children’s families.

July 3, afternoon: Shopping in Itaewon, following lunch at the Nashvills Steak House - decidedly American, but the burgers were good. We did some shopping, and while waiting for Leslee, who was picking up a ring she had bought, my eye caught a gorgeous amethyst pendant, and I had to buy it. I did, however, have the strength to pass up the matching earrings. Later bumped into a bunch of friends who were there with another tour - small world.

July 3, evening: Back to the hotel for Korea Homeland Tour’s farewell dinner. The families had all prepared skits about their time in Korea, and one as better than the next. When the dinner was over, Carole, Michelle, Leslee and I went to a great wine bar near Hongik with Austin (the tour guide and translator, who I know from my family's tour in 2001), Annie (the general manager of the travel agency in Korea that KHT works with), and Christina (also with the travel agency). The wine bar was lovely – in a little garden on a side street, and the wine and conversation were wonderful. What a great way to end a great week!

July 4, morning: Said good-bye to Carole, Michelle, Leslee and the tour, who left to return to the US at around 10. I then headed off to Namdaemun to get the last of my gifts. Back to the hotel for a shower, and then off to the airport.

And did I crash on the plane? Well, no. On the flight from Seoul to San Francisco, I was seated next to a young Korean man, Sing Ho, on his way to visit his brother in San Francisco, who is a pilot for KAL. We talked much of the time, I did sleep a bit, but it was more fun to chat with him. Finally, after a 9-hour layover at SFO, a red-eye to Chicago, a connection to BWI, and a super shuttle to National, I saw my husband and daughter for 10 minutes (they were on their way to a taekwondo tournament in Atlanta), and then my son (who picked me up). Back home at noon on July 5th. And THEN crash!

And now – back to the grind. I totally love Korea, cannot wait to return. And I urge any a-parents of Korean children who may stop by to go to Korea early and often. It’s an experience your family will love, and which your children must not miss.
Labels: KAAN South Korea