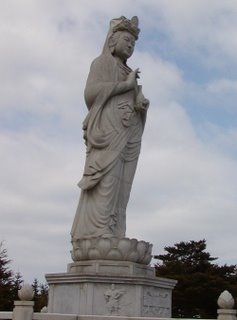 There are places that bring us out of ourselves, raise us above our day-to-day lives. Naksansa, the Temple of Compassion, is that place for me.

Naksansa nestles into the side of Naksan Mountain not far from Sokcho, a small city on the east coast of Korea. It was founded in 671 CE by the Buddhist monk Ui-sang Daesa, who upon meditating near the cave in which the Avalokitesvara Bodhisattva was said to live, was told by the Bodhisattva to build the temple there. Today, Uisangdae Pavilion marks the spot where Uisang once meditated. Sunrise at Uisangdae is said to be one of the most beautiful sights in Korea, and many come there to enjoy it at the new year. They come, too, to honor the goddess of mercy, Gwaneum, who gazes out to sea from the highest point of Naksansa. The towering white stone statue, called Haesugwaneumsang, is the largest in Asia.

With many of its building clinging to the cliffs of the mountain, Naksansa almost floats between earth, sea, and sky. My memories are of an exquisitely beautiful landscape - lush forest, steep cliffs, and crystal blue sea. And they are of a place of opposites. The peaceful atmosphere, created by the beauty of the place and by the the monks who prayerfully walk the temple grounds, is punctuated by patroling armed soldiers, there because of Naksansa’s proximity to the North Korean border and the sea. And because of past fires and its present role in Korea's tourist industry, the new and modern mix with the old - a new teahouse sitting near Uisangdae, the gift kiosk sharing the top of the hill where the Haesugwaneumsang stands.

Sadly, much of Naksansa was again destroyed by fire on April 5, 2005 (coincidentally my children’s birthdays), a fire so intense that it literally melted the temple’s great bell. In my header photo, the building on the left was one that was lost to the fire. But the little chapel on the right miraculously survived. These photos taken by Brian of Gangwon Notes show the same two buildings from another view, before and after the fire. 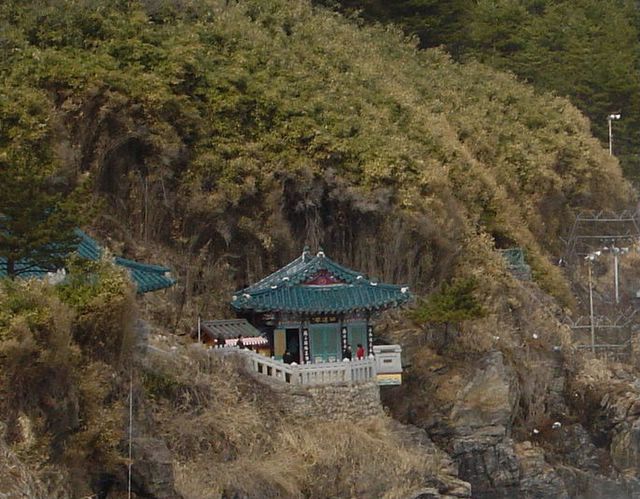 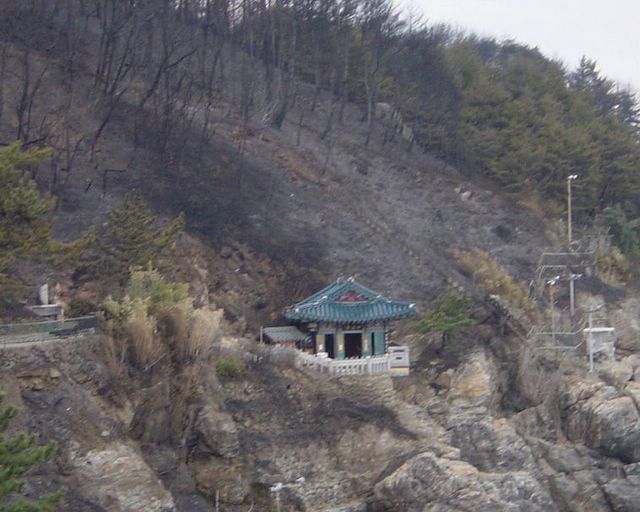 Now, a year later, Naksansa is rising from the ashes, as it has done before. I know I’ll go back, to see it as it is reborn, to remember it as I saw it in 2001, and to imagine what it was like in earlier centuries.

It is my heaven on earth.

unsignedmasterpiece said…
Why does it not surprise me that "The Temple of Compassion" is your favourite place.
August 12, 2008 at 6:06 PM