Opening Minds and Hearts at KAAN 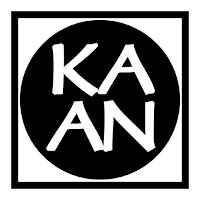 I'm a conference junky, one who unfortunately doesn't get to go to as many as she'd like. So I pick them carefully, and one that I wouldn't miss is the annual KAAN Conference.

I say it every year - this year's was the best. And it always is. We were in Boston this year - Cambridge, actually - which is the perfect setting for any conference. And the conference itself was the perfect combination of sessions, socializing, and entertainment.

Some are the big names of adoption were there this year - Joyce Maguire Pavao, for example, and B. J. Lifton, among many others. There were authors - Anne Sibley O'Brien and Marie Myung-Ok Lee and Rose Kent, for example. Others are up and coming contributors to the adoption and Korean American communities - like Adrian Hong of LiNK, who had the luncheon crowd on their feet after he told them about the horrors he has seen in North Korea, and LiNK's efforts on their behalf. And for entertainment - the amazing Grace Kelly. If you haven't heard about this young woman yet, don't worry - you will.

One of the main reasons I go every year is to catch up with the friends I've made in conferences past. They have become very important to me - people who live all over the country, all over the world really, and who share the experience of Korean adoption. Some I see more frequently, because they live here in the DC area (like the friend I had coffee with yesterday who lives less than half an hour away). Others I see only at KAAN, and very occasionally in between - Terra Trevor, Mark Hagland, Chris Winston, Maggie Dunham, Ross Tabisel (Ross and I manned the registration table with iron hands this year), and many, many others - including Jacey Norton, this year's coordinator, who deserves very special thanks for organizing this great event.

And then there are the new friends. One is Dr. Richard Boas, who started the Give2Asia program that is helping to support single mothers in Korea. Talk about putting your money where your mouth is! He is doing what I have only been able to think and write about, and has my deep respect.

The other is the one and only Claud of Musings of the Lame. Last fall, when KAAN called for session topics, I took a chance and asked Claud if she would be interested in doing a presentation together. I wasn't sure then exactly what we'd say, but I knew it would be about mothers. She accepted immediately.

We called our session Universal Motherhood, Universal Loss. My role was simply to introduce Claud, because it was her story I wanted this audience to hear. Often, we who have adopted transnationally push thoughts of our children's families from our minds. As Claud said, we find ways to say that another person's story doesn't apply to us. But this past Saturday, a roomful of KAAN attendees learned that the experience of a woman in the northeast United States is really no different than the experience of a woman in Seoul, or Guatemala, China, or Ethiopia. Wherever a mother loses her child because life has offered her no other alternatives, that mother grieves in the very same way.

There were few dry eyes by the time she was done. The response to Claud was warm and heartfelt - and clearly, the people in our session walked out with a new perspective, one that will no longer allow them to say that this one young mother's experience doesn't apply to them. 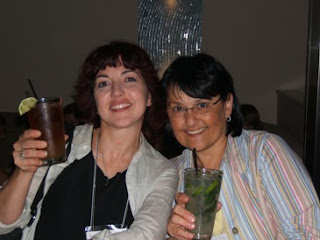 Claud made everyone see that the experience is universal.

Thank you, Claud, for opening minds and hearts this weekend.

Here we are, Dark and Stormy and Mojito in hand.
Labels: KAAN

FauxClaud said…
Yikes!
I look like I drank 15 Dark and Stormys before that picture was taken!

But it was a wonderful conference!

KAAN folks are so warm and welcoming..being the ONLY mom there could have been daunting..but the postive response form all to my being there was just overwhelming.
July 26, 2007 at 10:26 PM

Seoul Siblings said…
Going to KAAN was one of the best experiences I have had since adopting our children. It truly enlightened my husband, Jeff, and myself. We were so glad to attend, so glad to eat dinner with some of the organizers as well as you and Claudia.

I don't think there was a dry eye in the session that you and Claudia did. Just listening to Claudia's experience of what she would go through at night made me so emotional. I couldn't even tell her what I needed to during that session but caught her later on in the day to tell her what I needed and wanted to.

I told my friends with my local Korean playgroup that they missed an excellent KAAN conference (and it was only my first one).

justenjoyhim/judy said…
Thanks for summarizing the conference for us, Margie! It sounds like a wonderful experience, and I'm sure Claud's addition was truly wonderful and heartfelt and one of the best parts of it!!

Andromeda Jazmon said…
That sounds like a wonderful conference! I would have loved to be there just to hear you and Claud.
July 29, 2007 at 9:48 AM

Heather L. said…
Are there any audiorecordings of the presentation available for sale?
August 2, 2007 at 7:24 AM