Which is Sae Hae Bok Mani Baduseyo - much luck in the new year, or simply Happy New Year! Today is Seollal, Lunar New Year in Korea and other Asian countries. Of all the Korean holidays, this is the one my family enjoys celebrating the most, probably because we've celebrated with friends at Korean Focus' Lunar New Year festival for many years. This year the celebration is on Saturday, which is one reason I haven't been here too much - I've been working on preparations for the big event.

Dynamic Korea, the official website of the Korean Embassy, has lots of information about how Seollal is celebrated in Korea. Wherever you go, there are celebrations - at home, at Korean historical venues, everywhere, really.

One of the articles describes how Seollal customs have changed in modern times. For example, charye, the honoring of ancestors on festive days, becomes especially poignant for families separated by the division between North and South Korea. When family tombs are in the north, families sometimes perform charye at Imjingak Pavilion near the DMZ. I've tried to imagine what it must be like to know you have family in a place you can't get to, but I can't. That kind of separation is just too much for me to get my head around.

My favorite things about Seollal? 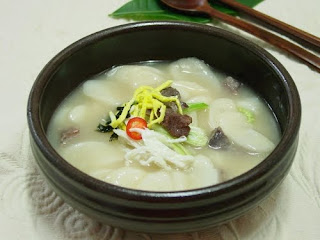 The food, of course. Like any holiday, Seollal is associated with special foods, in particular tteokguk, a rich beef soup with thinly-sliced rice cakes. In some parts of Korea, manduguk, or dumpling soup, is eaten instead. We'll be making mandu on Saturday, as we do every year - the frozen ones in the supermarket, good though they can be, simply can't compare with fresh home-made mandu! They're really not hard to make, either - great fun for kids and families, I highly recommend it! You can find recipes all over the net - here's one to get you started, from Kate's Global Kitchen, which is a great site for you foodies out there. She has a wonderful page with ideas and recipes for Lunar New Year foods for Asian countries.

Sebae, too, the traditional bowing ceremony. One of my favorite Seollal memories comes from a celebration several years ago. The Boy and The Girl had helped out, and after the event The Girl, two young Korean American girls, and I brought a bunch of Korean drums back to the home of Mrs. C, one of our friends, who stores them during the year. Mrs. C's mother lives with her family, and when we arrived to drop off the drums, Mrs. C invited us in to meet Halmoni. Because it was Seollal, Mrs. C. suggested that the kids do sebae with Halmoni. One by one, the girls bowed, Halmoni spoke to them, asked them questions about themselves, how they were doing in school, for example, and wished them Happy New Year. The girls spoke in Korean and English, and Mrs. C. interpreted where necessary. Everyone received sebaeton, the money Korean parents and grandparents give their children during sebae. The Girl's bow was very respectable, and watching her do it reminded me that it IS important to know the traditions, even if you don't use them often. She was proud that she was able to participate; I was proud and touched and grateful that she had the experience.

I encourage every adoptive family with Asian children to celebrate Lunar New Year in some way. Maybe your schedule won't allow you to celebrate tonight - that's OK, remember Asian Americans face the same work and schedule challenges, so there will be plenty of celebrating going on this weekend. Do something, though - something special to welcome the Year of the Rat!

From the Seoul Times Asian Zodiac page: The Year of the Rat - 1912, 1924, 1936, 1948, 1960, 1972, 1984, 1996. People born in the Year of the Rat are cheerful, thrifty, and resourceful. Bright and sociable, they are often very successful in business or politics. Although they guard their own secrets, they love to gossip about others. They can be generous at times, but their generosity extends only to those closest to them. Their compatible signs are Dragon, Monkey, and Ox.
Labels: Culture South Korea

Just wanted to say what a great New Year's party Koren Focus put together yesterday. The kids loved it (and not just because we won the rice cooker in the raffle. Gino and I learned more about New Year's celebrations and ideas to incorporate into our own celebration next year.