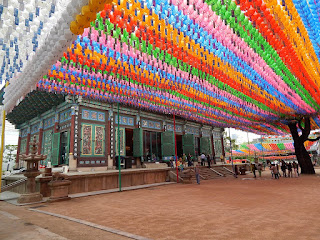 Today is Buddha's Birthday - although as Korea is thirteen hours ahead it's already past there. I've never been to Korea at this time, but everyone I know who has says it's a beautiful time of the year and a beautiful holiday.


In Korea the birthday of Buddha is celebrated according to the Lunisolar calendar. This day is called 석가탄신일 (Seokga tansinil), meaning "the day of Buddha's birthday" or 부처님 오신 날 (Bucheonim osin nal) meaning "the day when Buddha arrived". Lotus lanterns cover the entire temple throughout the month which are often flooded down the street. On the day of Buddha's birth, many temples provide free meals and tea to all visitors. The breakfast and lunch provided are often sanchae bibimbap.

Although I'm not Buddhist, I am drawn to Buddhism for many reasons, primarily the peace and mindfulness that are important to Buddhist practice. I need them - really, the whole world needs them. I see much in Buddhism that's complementary to my own faith, much to learn from. One source of learning has been the books of Thich Nhat Hanh - Going Home: Jesus and Buddha as Brothers and Living Buddha, Living Christ in particular.

Temples are always a part of my visits to Korea; so far my favorite is Naksansa, the one you see a bit of in my header photo. I love Jogyesa, too - it's a much smaller temple smack in the middle of downtown Seoul, but I like its bustle, and the fact that people stop by to pray throughout the day. On our family tour to Korea in 2001, we had the great fortune to travel part of the way with a Buddhist monk, Sunup Sunim. Sunup Sunim was (still is?) a Korean army chaplain, who joined the tour when we left Seoul and traveled through the countryside and visited several temples. I'm glad I had the opportunity to meet him, and to learn about Buddhism from him. He was also a lot of fun - the lollipop was part of his persona.

The Lotus Lantern Festival website has lots of information, images and movies about the celebration. There's also a lot of information about Korean Buddhism at the Jogye and Won Buddhist websites. Enjoy!

Edited to add this from the Hankyoreh.
Labels: Faith

Ferocious Kitty said…
Hi, Margie...I'm off-topic, but followed your comment from AntiRacistParent to your blog. I look forward to reading you!

Kohana said…
I was in the city this weekend, not realizing there was a celebration of Buddha's Birthday going on. The Chinese Garden and areas surrounding were packed and there was all sorts of stuff going on. So colorful! I wish I had time to stop instead of just walking through.
May 13, 2008 at 12:38 AM

Margie said…
Deesha, thanks, I'm hooked on your blog!