You know, The Boy will be 20 next year. The Girl will be the only teen in the family, and she'll be 20 before we know it, too. Honestly, I can't grasp how quickly their childhoods have flashed by. Too fast, too fast.

Every once in awhile I stop and think of something that happened when they were kids, a situation of one sort or another, and think that I could have handled it better if I'd only had the knowledge and experience. I think my intuition and gut are pretty good on parenting issues, but no one's perfect and I'm far from it.

When the subject is what I'd call a typical parenting issue - dealing with bedtime issues, getting the kids to do their homework regularly, and the like - there's a wealth of information out there to turn to in a myriad of sources. But when the issue is adoption, more specifically Korean adoption, the sources become fewer. At least that was the case back in the late 80s and early 90s when our children were very young. The risk with fewer sources is that the information they provide will be less proven, and more weighted in their favor. The result in our case was that we tended to accept the advice of our adoption agency and social workers on issues I view very differently today.

It comes down to questioning, I think, to the courage to ask "Why?"

I've stumbled upon a number of prospective and new adoptive parent bloggers recently, and am struck by the gratitude, awe even, in which many of them hold their agencies. I'm not judging here - it's really like looking a mirror. Adoption agencies can reach mythical proportions in the minds of people who are desperate to have (or save, as the case may be) a child, and agency staff raised to sainthood, at least to a position of such respect that it wouldn't occur to you to question their advice.

I can't say I ever reached this point, but I certainly wasn't immune to the phenomenon, and generally took everything offered at face value. I also accepted what I was told about our children's mothers and father, about whom we heard precious little, if anything. I remember hearing at some point that a young unmarried Korean mother had no viable alternative but to surrrender her child for adoption, and that in order to survive in Korean culture, she had to put her pregnancy and child behind her.

It's ironic, too, that now that I'm asking the questions I should have asked so long ago, the answers come pretty easily. I wonder if they were there all along, or if I'm reaping the benefits of adoptees and first parents and adoptive parents more courageous than I was, who asked the hard questions and demanded answers. 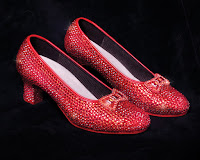 Of all the things I wish I'd known about adoption when it was new to my husband and me, it's that I always had the power to ask the hard questions. The time it took me to figure out that deference is an inappropriate response to adoption agency services may have cost my kids and their parents a lot.

"Why?" was like a pair of ruby slippers that could have taken my children and their parents to the places they needed to go. I waited far too long to try them on. You go put yours on right now.
Labels: Korean adoption Things-I-Wish-I'd-Known Truth

Judy said…
Oh, those agencies. I've learned far more here in Adoption Bloggerville than I ever did from my agency.

One reason why I insisted that we get a counselor with a specialty in adoption when we were looking for a family therapist for Nate was because I just knew that there might/probably would be issues related to adoption. DOH! So many others said there would be none just because he was adopted at 4 months old. Guess what? -- they were wrong.

Kohana said…
This was a good admonition to read today. With our efforts to adopt as expats, and finding very few, if any agencies that will work with us, I have been feeling like the only way we'll be approved by an agency is if I keep my mouth shut and don't rock the boat. It interesting how the lack of power and leverage in an adoptive situation can lead you to consider settling for an agency that is less than what you want. I need strong guides like you, reminding me to look sharp and choose wisely. Thanks
May 26, 2008 at 7:13 AM

DaedalRose said…
I\'m sorry because this comment is not directly toward your post. I am hoping, however, that you will take the time to read this, and make a future post based on the following information.

I am currently interning at the Global Overseas Adoptees\' Link (GOA\'L), located in Seoul, South Korea. I am writing to you with intentions of both providing you with information on, as well as asking for your assistance with our current campaign.

At the bottom, I will include a link leading toward documents about our campaign. There is an information package which contains the specific details about our campaign. Within, issues such as military service and tax responsibilities are outlined. The second document is the petition form. We are hoping to obtain 50,000 signatures by December 2008. To reach this goal, the Korean overseas adopted community must come together. We cannot do this without your help.

We would greatly appreciate your support in this campaign.

Margie said…
Daedalrose, I absolutely support this initiative. I found it last week on facebook and just joined the group there, and will be posting about it. I will also send the information to Korean Focus, which reaches families in the DC area, and to our chapters. Thanks very much for adding this comment!!
May 27, 2008 at 10:15 AM

new adoptive mom said…
You wrote:
It's ironic, too, that now that I'm asking the questions I should have asked so long ago, the answers come pretty easily.
~

Okay, so I'm an about-to-be adoptive mom (we're traveling to Seoul in just a couple of weeks to meet our daughter), and I WANT (want badly) contact with her first family if it's at all possible in the future years.

What are the questions you wished you would have asked? What do you wish you would have done differently? What would you tell new adoptive parents to do in order to encourage every possible chance of a relationship with their child's first family?

This isn't exactly the kind of advice you can find easily (certainly not from adoption agencies or on mainstream boards), so I'm really curious. I hope you post/respond with your experiences and ideas about what new parents can do to create and encourage connections.
May 27, 2008 at 11:12 PM

Don't Mess With Mommy said…
Unfortunately, I think people are frightened to rock the boat with their agencies by challenging or asking questions. Agencies basically hold your life in their hands while you wait to bring your child home. If I had it to do again, I would have been much more demanding of certain information and much more insistent on getting my questions answered.
May 28, 2008 at 2:14 PM