Saturday with Alison and John

The Barker Foundation's annual adoption conference was yesterday in Rockville, Maryland. I'm decompressing today; there was a lot to take in.

Last year's conference focused on surrendering mothers, a topic I haven't seen too many adoption agencies use as a conference theme before. This year the conference was titled In Our Own Voices: Adoptees and Foster Youth Speak Out. In the majority of the sessions (there were one or two on more generic topics), adopted people, teens and adults, shared their experiences with a majority adoptive parent audience. 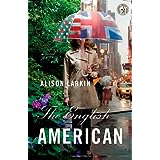 The day began with a performance by Alison Larkin, the author of The English American, a novel based on her story. Alison was born in the U.S. and adopted by a British couple. She grew up in England, and in an interesting twist of the typical transnational adoption story, returned to the U.S. to get to know her culture and find her first family. She now lives in New York with her husband and children, and travels around the country with her one-woman show. Her performance on Saturday drew from her personal experience and from the book, and was hysterically funny. Alison really is a hoot. But she something else, too: a tireless fighter for open records. She made it very clear that open records isn't just an adoptee, issue; it's an issue for everyone involved in adoption, particularly adoptive parents. It was interesting to watch the wheels turn in so many heads, and gratifying to witness so many APs shake their heads in agreement when, at the end of the show, Alison sang the refrain to her ode to adoption: Every child born today deserves to know their DNA.

Alison's book will be coming out in paperback in November, and even better, ABC has picked up the options for a TV series. If the show comes to be, I sincerely hope it retains the story line, and doesn't sanitize the issues.

I also had the opportunity to hear Dr. John Raible speak. Dr. Raible is bi-racial, and was adopted by a white family who made little, if any, effort to provide him with opportunities to be with people who shared his race and ethnicity. You know, I like to pat myself on the back and say that I get what transracial and transnational adoptees experience in "whitesville," as Dr. Raible calls the overwhelmingly white environments in which many are forced to grow up. But there was a moment in the presentation in which he let the pain of his experience reinforce his words, and I am not being melodramatic when I say it brought me to tears. What shot through my head like a bullet was the question How many such experiences have MY children had, but hide for any number of reasons?

This presentation was incredibly moving, but also offered adoptive parents guidance to help their children avoid as much of this pain as possible. He described the concept of transracialization:

To transracialize, we adoptive parents must make decisions that may disrupt the plans we previously envisioned for our families: homes in comfortable suburbs, homogenous private schools, etc. Instead, we must put ourselves into the environments that are most likely to welcome our children and give them the cultural, racial and ethnic support we can't provide.

Dr. Raible said something else that really hit home with me. He talked about identity, but as a verb rather than a noun. Many of us consider identity something we possess, a static condition inherited or passed on from person to person. But when you think of it as a verb - something we do - the connection between our actions and their effect on our children's sense of self becomes much clearer.

I also heard a moving presentation by three young woman who had searched and met their first mothers and, in some cases, first fathers. What struck me about all three was their tenacity in the face of the legal and administrative obstacles to reaching the information you and I probably have in a drawer somewhere, or could call someone in our family for right now. It was discomforting, too, to hear how all three of their searches were influenced by fear of hurting their adoptive parents, even when their parents were supportive. I hate it when people feel the need to apologize for who they are, or need to beg for basic human rights.

I'm still absorbing the day, but can say one thing for sure: What I learned yesterday has inspired me to do all I can to spread the word that closed records are unjust and inhuman. Every adoptive parent must stand with adopted people and work to change these ridiculous, outdated laws.

Many thanks to the Barker Foundation for your hard work in bringing this conference to our community, and to all the speakers and participants for sharing your stories and expertise.
Labels: Adoptee rights Adoption ethics Race Transracial Adoption

Leah said…
Thank you for sharing. We are now living in Korea and struggling to reach out to our son's first family. It has been amazing to see first hand how hard it is to get even the smallest piece of information. How can it be that someone not in our triad can say when and how???
March 23, 2009 at 12:34 AM

Margie said…
Precisely, Leah. How can it be that ANYONE can deny ANYONE this basic information?

I think we APs need to jump into this battle feet-first, and start letting groups like the NCFA know that we don't buy the privacy issue, which first mothers themselves dismiss. All that attitude does is perpetuate secrecy, which in turn leads to ever-more unjust adoption policies.

Every other parent in the US can find out their kid's medical history. Adoptive parents, for the most part, can't. A child's heath is less important than - what?

As I said in my song 'When medicine can save a life, it stops being a joke.'

And here's part of the chorus again!
"To solve your inner mystery
It helps to know your history
Every child born today
Deserves to know their DNA."

Margie said…
Alison! Good to see you found my blog! You were WONDERFUL on Satuday, it was a pleasure meeting you and a pleasure experiencing your performance. We are going to figure out a way to bring you down to DC!!

(Also, just want to let you know that Margie and Third Mom are one and the same - if you're like me, remembering peoples' names is hard enough, but connecting them with their online blog identities is impossible!!)
March 23, 2009 at 9:15 AM

rosemary said…
Thanks for writing this review up and sharing your thoughts! I just started reading "The English American" a few days ago.
March 23, 2009 at 10:04 AM

Alyce M. Jenkins said…
I am an adoptive parent who has already said "Enough"! I love to share with other adoptive parents how much our knowing our "children's" birthparents had enriched our lives as well as theirs. And recently our daughter learned that her birthmother has been dealing with breast cancer. What important information for her to know! If anyone has an inspiration how we can reach the adoptive parents with their heads in the sand, please let me know. I'm ready to get at it! Alyce M. Jenkins
March 23, 2009 at 11:50 AM

Alison Larkin said…
Sorry for not realizing Marie and Third Mom were one and the same! I loved meeting you. And I love the picture on the home page of your website. I will be performing the song again as part of An Evening with Alison Larkin at the JCICS conference in Indianapolis on Friday night. Will you be at the conference?
March 23, 2009 at 2:09 PM

Margie said…
No worries, Alison, I just wanted to make sure you knew.

I wish I COULD be at JCICS, but thanks to our daughter's taekwondo competition schedule, we're on a strict budget. So I'll be at AAC (can stay with family) and KAAN (wouldn't miss it). Maybe one of these days when JCICS is close I can come, though.
March 23, 2009 at 2:24 PM

Anonymous said…
I will share this short piece with first parents and adoptive parents who have or are working with me. Saturday night I was invited by a first mother to attend a special even - her bi racial son was becoming an eagle scout. He was just 3 when she relinquished a bi racial daughter to adoption. I listened as he spoke about what it was like being raised by a single blue eyes blond mother in a predominately white community. He said how much the male influence in scouting meant to him and what a self esteem builder it was as he has struggled to find his place in life. Like Barack Obama who has eloquently written about this, he has had difficulties. He has loved scouting and I left impressed with what it has done for him. Ellen Roseman Cooperative Adoptions, San Anselmo, California
March 23, 2009 at 3:19 PM

ALison Larkin said…
I will be so keen to hear what you think of The English American when you've had time to read it (hah!!! Time???) I think your kids might really relate to it - teens do - especially if they're at the dating stage - Bert Ballard is putting an excerpt from it in his book for and by adopted teens coming out soonish I do believe. (Bert was one of the operation babylift adoptees from Vietnam.) Do you know Bert?
March 23, 2009 at 5:52 PM

Nicole J. Burton said…
I was so sorry to miss Alison and the Barker Conference (my son had an orchestra concert all afternoon) but I love her performances and her book. It's very encouraging to hear adoptive parents "getting it" about many adoptees' needs for connection with our original families. It's tiring to having to be responsible for other people's feelings about adoption (and pretty co-dependent). Thanks for a nice blog, I'll be back.
Nicole Burton, Swimming Up the Sun: A Memoir of Adoption
March 23, 2009 at 8:06 PM

Margie said…
Nicole, I recently bought your book, too - now all I need is a second life to read everything in my to-read stack!

Alison, email to follow, got yours and need some time in the evening to pull some thoughts together.

johnraible said…
Thanks for attending my talk and for writing about it on your wonderful blog. I would ask people to remember that along with being an adult adoptee, I am an AP, or adoptive parent. I have 2 grown sons who were adopted from foster care. Both of them are African American, and as a biracial African American raised in "Whitesvile," the adoptive family I created is transracial. It seems that it happens frequently that APs overlook my credentials as a fellow parent who has walked the walk and talked the talk. I'm proud to be known as an adult adoptee, and am equally proud to be recognized as an AP of color. Thanks, Margie!

fav.or.it said…
Margie, here's a link to my DNA song which is now up on You Tube. It's a video recording of the song I sang at the Barker conference at the end of my speech last Saturday. It's for everyone, adopted or otherwise, whose own history is being kept from them because???? Thanks! If the link doesn't work, go to www.alisonlarkin.com and click through to the You Tube Channel (Bottom right of home page!) Or past this in web browser. Okay. Here's the link

fav.or.it said…
Sorry! This link should work! Not sure how to take out the ones that didn't. Sorry! Alison

Margie said…
John, thanks for commenting - it was great meeting you. I hope our paths cross again some day!