I'm a long-time KAAN-goer, having been to every conference since the first in Los Angeles in 1999. Last weekend, I was KAANward bound again to attend the 15th anniversary conference in Grand Rapids, Michigan. It was terrific.

KAAN, the Korean American Adoptee Adoptive Family Network, was founded in the late 1990s by a group of adoptive parents, adoptees and members of the Korean American community who recognized the importance of collaboration in support of adoptees and adoptive families with children from Korea. For adoptive parents like me, who came to adoption enthusiastically, but unprepared for the reality of parenting Korean children, those early conferences were true eye-openers: to the experiences of others, to new friends and to Korean culture.

They also feel like they happened light years ago, literally and figuratively. With each conference that has come and gone, I can see in the sessions and programs the evolution of the Korean adoption community from one largely controlled by adoptive parents, to one moving toward (if not already under) adoptee direction. That's no mean feat for any organization trying to serve a community whose members have different opinions on the experience that brought them together.

Although KAAN welcomes the participation and support of adoption agencies, it is unapologetically by and for adoptees, adoptive parents and first parents. KAAN's conferences and social media don't shy away from hard topics, but instead encourage open dialog on many topics that are taboo in the adoption agency setting or critical of agency practices.

All of this is why I have stuck around for so long - along with the fact that I am deeply connected to KAAN through the friends I have made over the years. I have learned from all of you: adoptees, adoptive parents, first parents, Korean American friends. We have laughed and cried together, worked and played, agreed and disagreed. KAAN, in the truest sense of the word, is community, which even when it's messy (as it most definitely can be) is a treasure.

So although I'm still digesting what I learned this year and sorting through the materials I brought home to read, I'm already thinking forward to KAAN 2014. Next year the conference will be in Minneapolis, and I, barring the unexpectedly unavoidable, will be there. You should be too.

I love this photo of KAAN's terrific Advisory Council thanking this year's attendees for being at the conference. I send the thanks right back to you, for the work it takes to make this conference happen year after year. 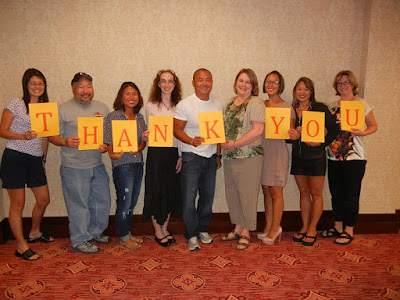 Thank you, KAAN, onward to fifteen more years of community!

Stacy said…
Thanks, Margie, for your ongoing participation in and support of KAAN in so many ways. Your voice and perspective is greatly appreciated.
August 13, 2013 at 9:26 AM

Margie Perscheid said…
Thanks, Stacy! It's been great to watch KAAN's evolution, even better to have been able to participate. I've got lots of ideas and reflections to send you, which I'll do as soon as time allows. Already looking toward 2014!
August 13, 2013 at 9:37 AM