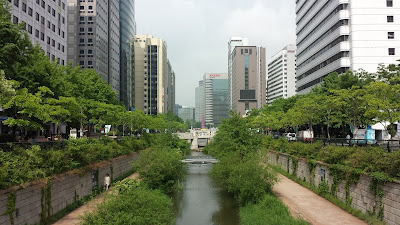 I have been here for just four days, having come for the primary purpose of attending the fourth annual Single Moms' Day Human Library event. I will write more about that after I've decompressed, carefully re-read each story and reviewed my notes. But right now I am allowing myself the luxury of soaking in Seoul-ness during my last few hours here.

Seoul is not for the faint of heart. It's large in every possible way - population, square mileage and sense of itself - but not a Texas large. In spite of its sweeping downtown boulevards and parks, Seoul is largely a city of neighborhoods, twisting around the city's hills in an endless maze of streets and markets that can turn you around in a blink of an eye. For me, getting lost is both a regular event and part of Seoul's charm

This is my fifth trip to Korea, and the only one I've spent exclusively in the city. Although this trip was short, I was determined to pack it full, and I did. Between the conference, a visit to the KoRoot Korean adoptee guesthouse, another with friends from the states who were coincidentally here at the same time, I had only bits of three days to spend on my own.

I spent them exactly as I wished, taking a long walk downtown to see the sights one afternoon, visiting a temple another day, and shopping, in trendy Insadong and gritty Namdaemun Market. I ate Korean food and drank Korean beer. I learned that Korea's coffee culture has exploded, and drank some of the best coffee I've ever had. And while doing all of it, I let Korea wash over me, like a Hallyu wave.

It's hard to describe what's in that wave, and what kind of wash it leaves behind. There are the unique smells of Korea, some pleasant and some not so much. There are the sounds, too, of the endless traffic, and of the language, which can be as sweet as honey when spoken by a shy young woman, or staccato and gruff when barked by an ajosshi or ajumma. There is also the endless sound of commerce, of buying and selling on the street, in shops and in markets. And there is music - you name the genre, you'll hear it sooner or later somewhere.

I wonder sometimes how much of my love for this country exists because this is where my children were born. If, for example, my children were not Korean and I came to Seoul on business, would I feel the same way about it?

Highly unlikely. It makes a difference that my kids are Korean and that this is their country. Because of this, I'm allowed to love Korea more than would make sense if I didn't have this very emotional connection. It makes a difference, too, to know that there are people here who are profoundly and intimately connected to the children I've had the privilege to parent.

I'm dreading stepping onto the airport bus within the hour, because once I do, my visit is essentially over and it will be awhile before I'm back. Although I have been pleasantly surprised at how easy my flights were, in spite of their length, and how little the time difference has affected me, this trip isn't one you do at the drop of the hat, unless you have endless resources and time. I can't come back in a month of two, so everything I have experienced these past four days and am experiencing right now has to last me a long time.

So I'm soaking it in. The crowds, the noise, the smells, the humidity, the traffic - I'm absorbing them all so I can release them, tiny bit by tiny bit, in the coming months. I will not, however, wait another eight years to come back, which is how long it has been since my last trip.

Seoul, I'll miss you. But I'll be back.
Labels: South Korea