Rest, little Hyunsu, you are not forgotten

The case of the murder of Hyunsu Kim, known in the news as Madoc Hyunsu O'Callaghan, has drifted out of metropolitan Washington, DC news. The death of little Hyunsu, allegedly at the hands of his adoptive father, Brian O'Callaghan, triggered the kind of media storm the adoption community has seen far too many times: hot and vocal in the immediate days and weeks following the event, quieter as the months go by, and finally, radio silence. The adoption community has kept Hyunsu in its conversation, but even we have had little to talk about. The trial of Brian O'Callaghan, scheduled to start on October 3rd, will surely rekindle the outrage.

The adoptee community has been the most attentive to Hyunsu's memory. TRACK is following the case and posts as bits of news become available, and a Facebook group dedicated to Hyunsu's memory does the same. Several members of the group live in or close to Damascus, Maryland, the adoptive family's suburban DC town; one was able able to find Hyunsu's resting place and pay a visit. We were all appalled to see the state of little Hyunsu's grave six months after his death: bare and brown, with no evidence of visits or care.

I believe in the concept of innocence until guilt is proven. But I also believe in the evidence presented by the coroner's office that leave no doubt that Hyunsu suffered far more than a fall. It therefore rankles to know that his little body lies forgotten in what is foreign soil to him.

It rankled others in the group, too. And so, on a hot August day, a group of us came together in Damascus, Maryland to pay our respects and let Hyunsu know he was most definitely not forgotten.

I happened to arrive first, in spite of getting turned around several times in Damascus trying to find the cemetery. With time to spare, I walked through the little country burial ground to see who shares this earth with Hyunsu. The names spoke of western European, mostly Anglo, people. Some names were represented many times, demonstrating a multigenerational history in this place. There were married couples and singles, and far too many who had died too young. The feel of the place was America, such an odd place for a little boy just a few months here to rest.

The cemetery is on a slope, and Hyunsu's grave is in the very last row before a little access road that separates the main cemetery from a large meadow with a few newer graves. Where most of the graves were grassy, Hyunsu's was brown, the grass dry and untended. A vase with a few wilted flowers, a gift from a Korean adoptee who had visited earlier, was the only evidence that someone had been there at all. There is no stone, only the flat printed marker provided by the cemetery or funeral home. 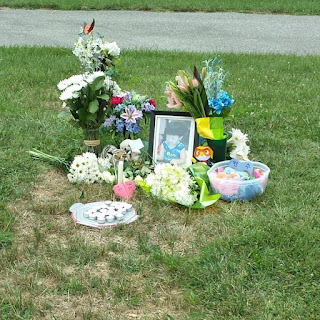 In the time before the rest of the group arrived, I said my prayers for Hyunsu: Eternal rest grant unto him, O Lord, and may perpetual light shine upon him. May he rest in peace ..." But it was hard to bring peace to the sad little grave. It is simply too disturbing to imagine a child as young as Hyunsu lying there, broken as he was. But I prayed all the same.

The rest of the group, adoptees and another adoptive parent, joined shortly after, and we first set about clearing the grave. We placed a photo of Hyunsu at the head and surrounded it with flowers and stuffed animals and a little Pororo to match the one on his t-shirt. The emotion was palpable, although we weren't crying at that point. I think we were all a little angry at the state of the grave, but showed our anger in silence.

The ceremony that followed was simple and beautiful. In the reading of a memorial, music, the lighting of candles and placing of beautiful chongi chopki hearts with the names of attendees present physically and in spirit, we all remembered Hyunsu. A special candle was lit in honor of Hyunsu's mother and placed near his own. There was song. And there were tears. 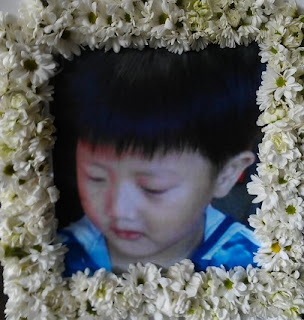 At the end of the memorial, one very organized attendee placed all of the paper hearts in a plastic box she had brought for the purpose, along with a note asking that it be left there in memory of Hyunsu. The box was big enough to hold the stuffed animals, so we put them in as well.

We talked a little longer, all voicing the hope that our memorial, and in particular Hyunsu's picture and the box of hearts and toys, would stay with him for at least a little while, and would then be taken somewhere and saved as tributes from a community that hasn't forgotten. We talked, too, about a headstone for Hyunsu. It's hard to say why there isn't one there; I am not actually positive that Hyunsu's adoption was finalized and am therefore not sure the adoptive family would have been allowed to purchase one. There's some research being done on this, in the hope that - if it is allowed - the community can buy a stone to honor him.

I actually wish for something different. I wish that Hyunsu could return to Korea, and sleep among his people. The land that gave him life didn't meet his needs, but the country that should have welcomed him did worse. It just seems wrong to me that he is in this suburban Maryland community, where his grave will only bring curiosity, for his name or for his story, depending on whether or not visitors to the cemetery know it or not.

It's not likely that he will move, though, so while he is here we will continue to honor him. Sooner or later there will be a stone, because the Korean adoption community will make it happen, one way or another. He will be visited by those of us who can come.

Hyunsu will not be forgotten. I pray that justice will be done for him, so he can rest in peace.