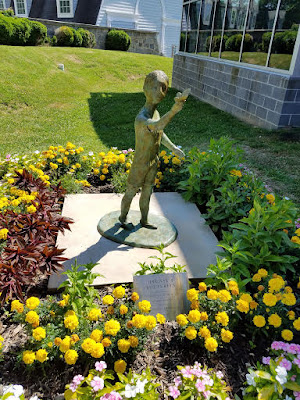 On Monday June 12th, I had the pleasure of joining the unveiling of a statue memorializing little Hyunsu Kim at the Linwood Center in Ellicott City, Maryland. Known in much of the American media as Madoc O’Callaghan, Hyunsu was brutally murdered by his American adopter, Brian O’Callaghan, on February 3rd, 2014. He would have turned seven on May 17th.

The work of husband and wife artists Thomas Park Clement and Wonsook Kim, 현수의 나비 (Hyunsu's Butterfly) is one of a pair of statues memorializing Hyunsu’s short life. The first was unveiled on April 4th at The Daniel School in Seocho-gu, Seoul. Maryland First Lady Yumi Hogan, working with Secretary Carol Beatty from the Maryland Department of Dibilities, introduced the idea of a partnership between the Linwood Center and the Daniel School early in 2017. The partnership will go beyond hosting the twin statues, as both schools provide education and support for students with a variety of disabilities and on the autism spectrum.

The statue occupies a place of honor in the Linwood Center’s courtyard, surrounded by a garden created by First Lady Hogan and Linwood students and staff. Worked in bronze, it is warm and earthy, and radiates a young child’s curiosity in his world. Hyunsu runs forward, eyes on the butterfly that rests gently on his fingertips: in artist Clement’s words, a metaphor for Hyunsu’s metamorphosis from flesh-and-blood child to freed spirit. It is comforting to know that the statues stand silent witness to the horror of Hyunsu’s adoption, and to the painful experiences of other Korean adoptees.

It is the unseen above all that captures my thoughts when I view Hyunsu's Butterfly. I see my children when they were young, running carefree and loved. I see Hyunsu’s Korean mother and father, siblings, too, running behind him in a kinder, more just world. But I also see the history of abuse and broken promises to Korean adoptees, in the faces of the Sueppel children, Adam Crapser, Phillip Clay, and many more.

I see the O’Callaghans, too, blessedly not near Hyunsu, but rather in court, which is the only place I've ever seen them. Brian O’Callaghan, looking blank. The smugness of the NSA attorneys at the sentencing. Prosecutor Donna Fenton’s shock upon hearing the sentence, woefully short for such a crime. Then Judge John Debelius’ quick getaway at the end. But worst of all, Jennifer O’Callaghan: laughing with the defense team at an earlier hearing, giving an Oscar-worthy performance at the sentencing. How is she not complicit? These all come, unbidden and unwanted, but they come. Until justice for Hyunsu and all intercountry adoptees is better served, they always will.

Hyunsu’s short life and brutal death have galvanized the Korean adoptee community, giving voice to the reality of adoptee abuse and in support of abused and suffering adoptees. His murder and the creation of these beautiful statues have sparked the founding of the Hyunsu Legacy of Hope Foundation. Led by Nancy Auvil and Nan-Leigh Yi, the foundation will serve intercountry adoptees who have suffered at the hands of adoptive parents, agencies and unjust laws.

If you, like many, believe that Hyunsu's adoption and murder are an adoption anomaly, I encourage you to step outside of your world and connect with intercountry adoptees who have experienced abuse and pain. Hear them with an open heart and mind, intent on validating rather than dismissing their experiences. They are telling you that intercountry adoption is broken, and you should listen.
Labels: Adoptees JusticeforHyunsu